Accountability of public funds and security of limited public resources against corruption and embezzlement calls for effective public finance management. In efforts to ensure accountability, the public sector audit and the financial controls in Sudan continuously carries out assessment and analysis of the public sector entities at the federal, state, and at local level.

According to Padhan and Dorotinsky (2007), public finance management becomes ineffective when;

The recently released Open Budget Survey 2021 results rank Sudan at 116 of 120 countries with a transparency score of 1/100 points. Open Budget Survey is an internationally accepted matrix that uses independent, fact-based and comparative to assess the level of public access to the national budgeting process. Looking at Sudan’s OBS (2019) report, Sudan scored two percent on transparency, zero percent on public participation, and thirty-three percent on budget oversight.

On budget decisions, the government looks at the forms of taxes to charge, the services to provide, and how much debt to seek. Therefore, a good budget decision has an equal effect on society in terms of the well-being of the people, including the most disadvantaged members of society. According to the 7th edition of the OBS report (2019 results) on Sudan, a score of 33% on budget oversight means the country passed the quarter mark although there was still room for improvement to at least attain the halfway mark. Zero percent on public participation was a poor score as was below the quarter mark, therefore there is a need for a lot of improvement. Finally, a two percent score on transparency begs for better strategies to identify avenues of growth.

Each country is assigned a score from 0 to 100 based on the simple average of the responses to the 109 questions that assess budget transparency; a perfect score on a particular question is 100. The average scores result in a global ranking of budget transparency called the Open Budget Index.

Sudan’s Open Budget Survey was based on published information, activities and development that took place. The OBS report is also based on survey that was conducted using questionnaires through the guidance of a budget expert. 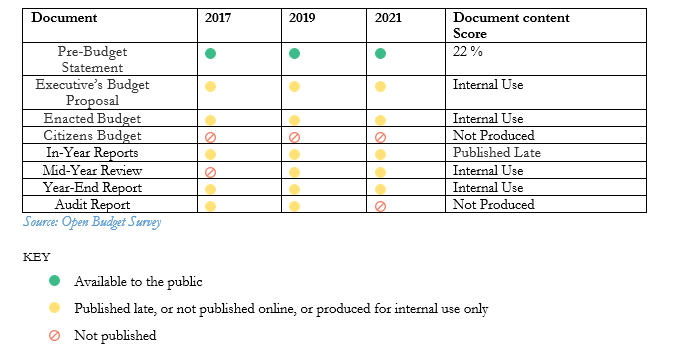 Looking at the 2017, 2019 and 2021 Open Budget Survey results, only the pre-budget statements were available across the three assessments. The other documents were either published late, not published, or were produced for internal use only across the three assessments. When it comes to document content score, the pre- budget statement is the only document that had a score, the rest were either not produced, meant for internal use only or published late.

When it comes to budget decisions, the government looks at the form of taxes to charge, the services to provide, and how much debt to seek. Therefore, a good budget decision has an equal effect on society in terms of the well-being of the people, including the most disadvantaged members of society.  According to the 8th edition of the OBS report on Sudan, a score of 6% when it comes to budget oversight is below quarter mark and a clear indication that there is a lot that needs to be done. Public participation had a paltry score of 4%, which is very poor and therefore begs for improvement when it comes to public participation. Finally, transparency had a score of 1%, an indication that there is extremely limited information available to the citizens.

There is a need for an independent fiscal institution to be set up in Sudan as currently, none exists. Additionally, there is need to strengthen the oversight institution in Sudan through funding, training and granting the institution full powers to operate independently. Finally, the legislature should debate the budget policy documents before they are tabled for approval to improve budget oversight.

The full report can be downloaded here.

We remain ambassadors of peace during this electioneering period.

Diakonia in Kenya under the Country Governance and Accountability Program convenes partners , CSO’s and public officials to discuss on social accountability in health service delivery, financing, and governance.